Green Fox Academy was brave and faced a huge challenge: they taught programming in China, despite the fact that it is generally known that their use of internet differs immensely from ours. For example, both YouTube and Google are forbidden. 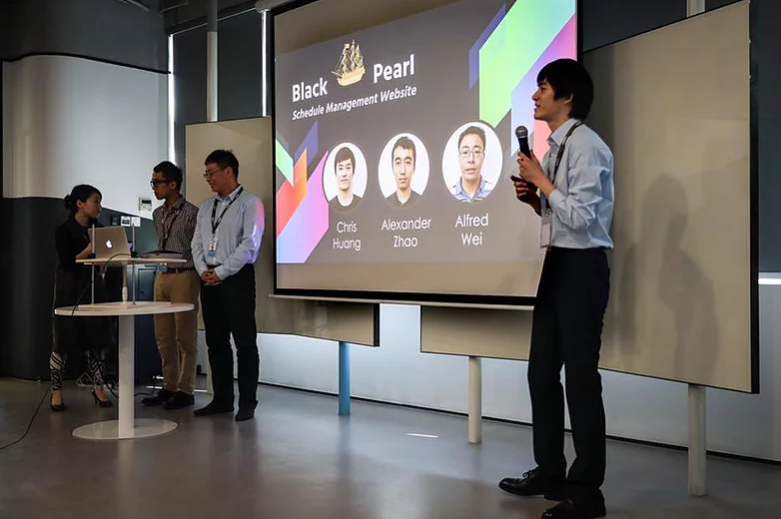 Green Fox Academy's sister school in Hungary was brave and faced a huge challenge: they taught programming in China, despite the fact that it is generally known that their use of internet differs immensely from ours. For example, both are forbidden.

Stereotypes – with the exception of meals – were refuted, however the methodology that pleased the Chinese survived the test.

Green Fox Academy commenced the programming course in Shenzhen, China with the duration of 10+1 weeks. The course was in English and it was attended by young employees of the local multinational company EPAM. It turned out that the Chinese enjoyed the siesta after lunch, they did not talk about business matters during lunch, and that even they are used to watching Game of Thrones in their free time, just like our students back home. Despite the initial difficulties (e.g. typhoon) and the lack of traditional internet access, the Hungarian mentors and the Budapest school stood up to the challenge.

“Even when we were planning expansion, we were thinking about Europe at first, but then everything changed somehow. Through one of our mentors, the reports about our methodology got to the headquarters of the software company EPAM in Shenzhen, where our work received positive evaluation and we were asked to do training for their company – says, a co-founder of Green Fox Academy. “Because of the size of our school, it was a huge challenge, mainly because we did not do anything like that before. Our methodology is the most special thing, even if there were those who doubted us and did not trust us. According to them, this methodology works only in Budapest because here we know the language, culture, and it is easier to hire people here. Since the sending of learning materials alone is not enough, agility and flexibility produced results: our methodology worked even in China, so I believe that it will work anywhere in the world.”  (nicknamed Tojás/Egg) was the head of the delegated team and at home, he is responsible for the quality of education. He explained that similar training like the one which took place in China are regularly organized even here in Budapest. “We cooperate with several other companies and the implemented process is that they employ graduates of computer science at the university and we will, during intensive training, achieve that the basic knowledge gained at the university is supported and thus young people will
become more employable. One such training was carried out just now in China for EPAM in Shenzhen. When the technology was discovered, we appointed two of our expert ,a junior mentor, to realize the practical part of the training for 10+1 weeks. We have been very busy preparing for this challenge, often during nights, but it was worth it. Outside, more and more requirements were coming. Today, I can say that we are able to meet different requirements and meet them even when there is little
time left until beginning of such training. I hope that we will not be surprised.”

Mr. Levente Bélteky, Levi, one of the longest working junior mentors at Green Fox Academy, told us that he found himself in an unexpected situation, which had to be solved, during the first week: because of a typhoon, which means a day off for people in China, we had to immediately reschedule materials and timetables for the first week of training.

“We had to be very flexible, for the most part, the lessons were really developed on the spot. It is generally known that participants receive a lot of homework for training in Budapest and they have to deal with the materials at home. In China, we had to squeeze the training material into 8 hours a day, so we were limited by participants’ working hours. Of course, there were also those who jumped into it all the way and they studied the training materials even at home, but in contrast to the traditional training, we could not demand it there. Other issues appeared in connection with the training material: all videos, which we use during the lessons, are on YouTube, but YouTube (and Google as well as other tools) is not available in China. This is why we could not ask the listeners to play one or the other video at home, simply because they did not have the opportunity to do so. It was interesting to watch some of them who brought their own blanket after lunch, they moved
chairs and rested, while others played cards or table football. In their free time, they watch Game of Thrones just like our students back home.”

The company EPAM Shenzhen strictly monitored and checked week by week who was making which progress in their studies, since it is the responsibility of this company, which employs 22-26 year old young trainees. EPAM provided not only students, but they also supplemented the training with English lessons or Agile training. They further ensured that students were introduced to all fields ranging from the sales team to the people working on projects, and the company also helped with their integration into the company community. Mr. Tojás told us that their customer was very happy at the end of the 10+1 training. They took into account professional development, but the same emphasis was placed on positive changes in the
eligibility of individual persons. “In this field, it is not the most important for people today to master a particular technology, but to know the methodology. We will teach our listeners to learn.”