Zsófi Princz specialized in biology during high school and studied to be a doctor. Over time, she became more interested in literature and history, reading a lot and learning languages. She finally decided to major in international relations at Corvinus University. She thought about becoming a journalist, a diplomat or foreign affairs consultant. Here’s the story of Zsófi Princz. 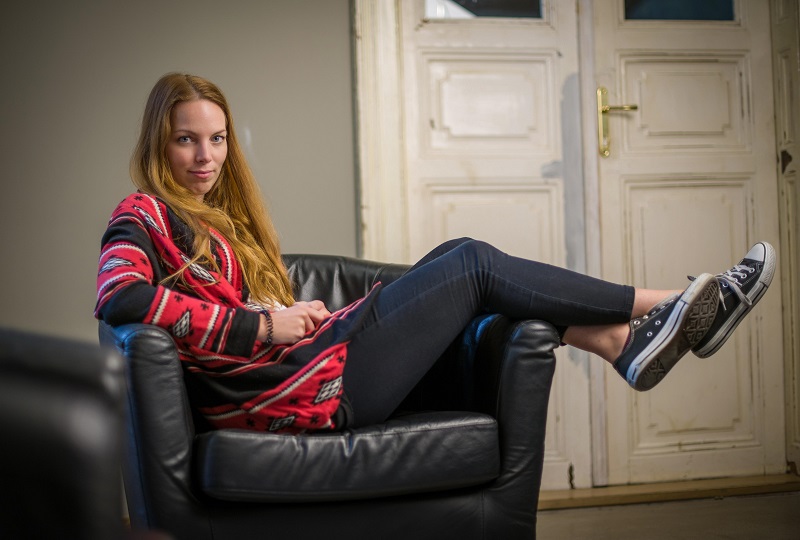 “I wanted to sit on the other side with the programmers.”

She specialized in biology during high school and studied to be a doctor. Over time, she became more interested in literature and history, reading a lot and learning languages. She finally decided to major in international relations at Corvinus University. She thought about becoming a journalist, a diplomat or foreign affairs consultant. Here’s the story of Zsófi Princz.

“I loved university life, but I could’ve settled with greater challenges. At the time (2007-2011) it seemed realistic to land a job at a European Union institution, as a lot of people went to work for the EU administration. Then things turned out differently. I started working at a service center and was responsible for French language accounting. The work didn’t require any creativity at all, we just did our jobs and went home. As a person who loves dealing with challenges in my spare time, solving logical puzzles and text-based math problems for fun... I felt that somehow, I messed things up. I should have continued my studies and finished my Masters. In fact, I ever regretted choosing a more specialized university major after high school. I was deeply despaired. As a product of the Hungarian education system - where you get good grades if you can repeat the material you were taught - I tried doing a good job and for a while, I wasn’t looking for anything else. I was dissuaded from continuing my studies by the fact that I could already support myself from my income and I didn’t want that to change. Finally, after two years at the company, I decided to quit since I couldn’t put up with it any longer.”

Zsófi considered going to an event-hosting firm where she could work with people. But that’s not what happened in the end. She was hired as an account manager by a small advertising agency, Quince. She says this was the best thing that could’ve happened to her.

“I could finally have ideas of my own and experience what it’s like to realize a project and be a part of a team. I learned what it’s like to draw up a plan and carry it out and what it means to work overtime and give your 100 percent best and how to consciously build on my strengths. As a B2B agency, we worked on a great number of projects that were closely tied to the field of IT. Oddly enough, the firm had its own small team of programmers – which was uncommon for advertising agencies.

I have to admit that I shared the common, yet entirely untrue view that programmers are “nerds”. That was before I realized how much creativity goes into programming! It forces you to continuously stay on your toes and you have to constantly develop yourself and use your head, albeit in an nonconventional manner. We prepared websites and e-learning pages for our partners. We had to continuously work on these tasks while facing one challenge after another about finding various solutions. I loved these discussions, which I naturally attended as an account manager. I tried to acquire as much knowledge as I could and longed to sit on the other side with the programmers.”

Zsófi encountered Green Fox Academy on the net on multiple occasions and she decided to try to attend their training. She explained how she arranged her affairs in an open and sincere manner at her workplace: she told them right at the beginning that she’s taking their entry exam and if she passes, she’d quit. The agency accepted her decision in a compassionate and supportive manner, even though Zsófi had been with them for three years by then. She’s still in touch with the firm to this very day and she’s grateful for their support.

“It was just a year ago that I started the training at Green Fox Academy. I’m convinced that these few months were a turning point in my life. Previously, I couldn’t imagine a school like this and that it’s possible to teach people this way. They didn’t teach us from books in a strict manner, but rather they tried to help you figure things out on your own and gave you the space to do this with the support of ambitious teachers. I regret the fact that in Hungary, systems like this are only available in such small, closed communities.

We were the first Java programming class. They set the bar high, as most of the people attending the training were diligent as it is, so it wasn’t a rare sight for someone to freak out if they didn’t understand a certain task. Yet, we knew that instead of learning the material, we would truly make progress by practicing a lot. I went through a slump and there were some tasks that I coped with slower than the others, but I finally understood them. I didn’t go to an alternative school, so for me, the training at Green Fox Academy was the first of its kind and I’m sorry that the national education system doesn’t work like this. We could’ve debated and carried on through with subjects like this at university seminars. It’s far better and easier to learn things in inspiring surroundings than in a passive system.

The truth is that the social scene around me influences and defines my mood. One of the advantages of programming was to choose a profession that would be independent of the political situation. Programming is one of these few areas of life.

Thanks to Green Fox Academy’s placement program, a stream of partner firms showed up to introduce themselves and conduct interviews. For me, CIB Bank seemed likeable and I was pleased when they called me to arrange an interview. I received paper-based logical tasks to solve while they kept asking me why I’m doing it this way or that... I didn’t finish all the tasks and I noted to myself that I surely failed to pass. I asked to take the sheet with me so I could finish the tasks at home. They asked me to send them the results once I was done. I sent off the completed tasks the same day and the next day, at the matchmaking show, it turned out that they liked my attitude so much that they picked me. And since I marked them as my first choice for my future workplace, I was thrilled. All of this happened in March of this year. I went for a two week-long break and I’ve now been working a full 8-hour shift at CIB Bank for nearly six months. I work with so many great senior programmers and there’s so much expertise on that floor that I’d love to just to sit and listen to them all day. I try to devote as much time as I can to learn and know even more about the field. I’m the first person from Green Fox Academy at CIB Bank, so I feel I have a huge responsibility. I’d like to prove that I received some great basic training. So far, the feedback is positive, yet I know that I still have a lot to learn before I can say I’m a programmer. Yet I’ll definitely reach that point, within one year at the latest!”